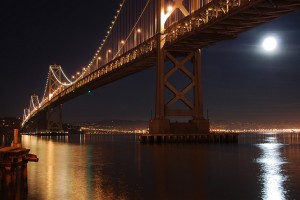 A few of my friends have headed to San Francisco lately so I’ve been copy/pasting an email lots. I figured I’d just put it on the blog and point folks there. So here goes – some of my favorite places in San Francisco.

I was in San Francisco – one of my favorite cities – this week and went to a Filipino restaurant out there. I had no idea what to expect from the food – I was guessing pork-based or heavy on the seafood with Spanish influences. But beyond that I wasn’t sure.

If you can read the menu you can see that it is pork and fish based with Spanish influences. But they’ve also got some stuff that I’ve never seen on a menu before. Like paella with squid ink rice and squid flakes. And grilled cuttlefish stuffed with a fresh salsa-like concoction.

Everything was excellent. My favorite was the cuttlefish. It was less chewy than squid typically is with a little more flavor. You could taste the grilledness in it and the salsa fresca was excellent. The squid ink gave the paella a slight sea taste, though not quite fishy.The squid flakes were dried tentacles and were slightly crunchy.

I Just Flew In From San Francisco…

…and boy are my legs tired! Ah yes, San Francisco, that wonderful peninsula and surrounding area which has more than 50 hills within the city limits. From which the dot-com revolution had its equivalent of the cosmological inflationary period. The legendary Haight-Ashbury area, formerly home to beat poets and radical hippies, has been transformed in the same manner as the Die Hard series of movies: A once great institution now mostly only good for outrageous incongruence and mocking. The Castro district, a place Fidel would almost certainly avoid…not that there’s anything wrong with it.

Mark Twain said about the city “the coldest winter I ever spent was a summer in San Francisco.” Unfortunately, that’s not true this week as temperatures are hitting the mid 80s and low 90s. But then I’m in the middle of the city, not on the north side where the pacific breeze tends to keep the climate more moderate. Microclimates are plentiful in the city by the bay, and there can be a 10 degree (F) temperature swing just on the peninsula. Going inland can be more than twice that.

If you’ve never been out here, you could come for a month and not see it all. Becoming friends with a local will really help out with that. Alcatraz is cool and the Golden Gate bridge is pretty, but ditch the tourist trail as soon as you can and head out on your own to explore. Budget accommodations tend to be abundant in certain areas of the city, but be forewarned that you get what you pay for. Don’t expect to be pampered for under a couple of hundred bucks. On the mainland your luck is better for finding affordable places that are decent, and you can take BART back into the city.

I don’t have time to run down all of the great stuff that I’ve done here, but I want to highlight some cool things I’ve done here.

So anyway, that’s my quick list. Here are some additional notes about accommodations, places to eat, etc.