A Stroll Above the Cascade

I took a walk, starting by hiking up the Cascade in Yerevan. I should explain that the Cascade is a man made feature here that has steps, terraced greenery and at some point will probably have several water features, turning it into a waterfall of sorts. At the top it leads to a large platform from which you can look out on the city and, more impressively, Mt. Ararat beyond. 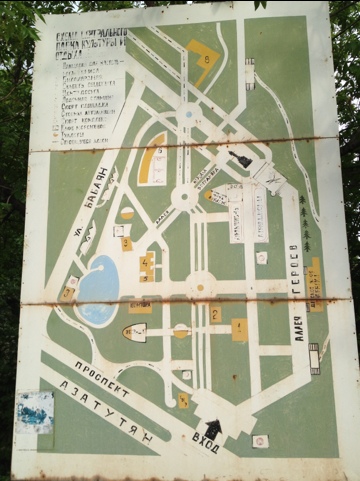 Just past the top of the Cascade is Victory Park (Haghtanak Park). Slightly worse for the wear since the collapse of the Armenian Soviet Socialist Republic, it is still a serviceable green space. There’s also what they call an amusement park with the feel of a carnival – cotton candy, ice cream, shooting games, small rides and the like. The highlight is the Mother Armenia (Mayr Hayastan) statue, brandishing a sword and looking out towards Turkey to the west. Reinforcing the subtle point are several tanks, mortars, missiles and planes facing in that direction. All seeming to say “we’re ready to do this anytime you are.”

Kept walking down General Babayan St. which has a few embassies and other nice houses. Then through the Arabkir district. It’s a mostly residential area, with apartment buildings, small markets, beauty salons and the like. Some kids followed after I stopped to buy some fruit. They started shouting broken English – some of it rude – but eventually I turned and looked at them at which point they scattered.

Walked back along Marshal Bagramyan St. Stopped into a bizarre place called the Sherlock Holmes restaurant. Decorated in a style reminiscent of, but not quite capturing, an English Pub, a loud karaoke song greeted me. Before I had time to turn and run I was greeted and whisked to a table. The atmosphere turned out to be not too bad. The singers were ringers and it was not karaoke after all, despite the looks of it. I know because they charged $2.50 for it. And the wait staff were friendly and spoke English fluently. The food was alright. Not world beating but not awful.

One Month in Armenia, and Counting

I’ve been in Armenia about a month now and I’ve seen it go from miserable to welcoming. The weather has become very pleasant and with it the people are warming up as well. With the growing grass and budding flowers I find the city growing on me as well.

Yerevan is one of the easiest cities to navigate that there is. Laid out on a grid system with a perimeter encircling it, the city center is a small enough to get across easily by foot in a half hour. And taxis in Yerevan are plentiful and insanely cheap – it’s $1.50 minimum, which covers 5km. The Yerevan metro is alright for reaching the outskirts and is about $0.25 per trip.

The cost of living in Yerevan for other things is also quite low. There’s a market with fresh foods open every day, where you can get anything and everything and very cheap. Chain grocery store prices range from modest to outrageously expensive, depending on what you’re buying. But they also carry other necessities like toilet paper and Starbucks coffee.

The expat community here seems to be just the right size. It’s not massive like in many capitals, but it’s large enough to sustain many different groups of people who get together often. That’s nice because it means there’s usually something going on. Just about everybody knows each other or knows of them, and they’re all very receptive to new people, whether here to live or just passing through.

What’s not to like? Well I do have a few gripes.

Seems like people are hit-and-miss about ripoffs. I’ve got to review every bill to make sure somebody hasn’t added extra stuff or overcharged for things. Like the double espresso that was marked up as a double-double expresso. And the random things added to the bill every so often. Also I have been quoted prices in dollars, then they use a way low conversion rate. So I always have to confirm those prices in Dram before I agree. And sometimes when you go to pay, if you don’t have exact change they will just raise the cost. Sometimes they say it’s because they don’t have change, but sometimes they don’t try to make any excuses.

And certain things seem to be decades behind. Like smoking. Smoking is allowed just about everywhere – restaurants, bars, offices, public spaces, etc. The decor dates from between 1960-2000. It’s actually hard to find stores that sell modern looking things. The metro, even though it was built in the early 1980s seems to date from the late 1950s. Maybe the equipment was hand-me-downs from other Soviet countries. And the busses are also old and belch black smoke.

But all-in-all that’s not much to complain about. It’s a good place to be and I’m really enjoying it!

Today I subjected myself to my first haircut since arriving in Armenia. I survived and am actually pretty impressed with the craftsmanship and sense of purpose the barber showed. And I like the result, though it’s not my typical style.

I’ve been in need of a cut for quite some time now. As far as I can tell, the only place to get your hair cut is in a place marked Beauty Parlor or Beauty Salon. They serve both men and women – for men the going rate for places I’ve seen is 1,000-2,000 Dram, or about $3-5 USD. There are lots of these shops all over the city and there happens to be a place across the street from the apartment. That’s convenient. I went in and in broken English and broken Russian we mostly understood each other. Hair cut. Normalnaya? Da. Ok – Sit.

First wet and comb. Comb. Part. Comb. Part. Repart. The barber was meticulous, though I rarely my fingers through it much less a comb. He got the part straight as an incision. My hair lay open to his scalpel.

He started cutting by thinning first. Usually that’s saved for last. I was hoping he’d cut it shorter than it was at some point. Soon hair rained down Pools of hair form on the blue apron like dark rain on a tarp. After a while of this, it was indeed shorter. Just through attrition of the thinning shears eventually every hair was shortened to some degree.

Then he sets down the thinning shears and with a snap grabs clippers. Moves on to scissors again with a snap. A dozen or so changes, a dozen or so snaps. A couple of times he left it out.

Always with the look of grim determination of a sculptor. Assessing, analyzing, adjusting. Every once in a while a look of surprise, then his lower lip would extend with a smidgen of pride. He labored over my hair with the intensity of one go has thrown himself into the task at hand. Every minute or so the comb would reappear to redefine the part and to straighten and push my uncooperative hair into shape.

The last step was a 15 minute comb solo, shaping, wetting, combing, blow drying, more wetting, a snip here and there for perfection. Finally, he proudly stepped back and with a pat on my shoulder silently announced that he was finished with me. A stylish Russian haircut.

What do you think of the result?

Selling Everything To Travel The World

I put the following ad on Craigslist a couple of weeks ago.

As the title says, selling everything I own to go out and travel. Not giving up on materialism, just pawning it. There’s much more of the world out there than in here anyway; I’m not getting rid of anything but attachment to these things. But forget the metaphysics, you’re here about the stuff for sale.

No reasonable offer refused. Unreasonable, impossible or quixotic offers encouraged. Everything for sale except soul (it’s a bit tattered but I still want to keep it). A partial list:

All items sold as-is, but will be accurately described. Cause I’ve got karma to worry about!

So what’s in my future? Thanks for asking! Heading to Armenia for about 6-months. Then, who knows. Love to go to Argentina for a while so maybe I’ll work on that. India would be cool. And I haven’t been to Africa or Antarctica yet so those are on my list at some point. Oh, speaking of which I’ve got travel books for sale too. You never know when you’ll want to know where the blues bar is in Riga (sorry, they don’t do BBQ there). Or break a tooth in Tibet and need to find a dentist (your choices there are pretty grim, but the military hospital can patch you up).

I’m going to try making a living blogging (http://meanderingwoods.com – tell your friends) and photography. Maybe dabble in a little geopolitical discourse. Maybe set up a food stand and sell fish tacos wherever I am. That’d be a novelty in Russia! You know, whatever.

I got rid of a lot of stuff, made a few dollars and met a lot of cool people. And some weirdos too, like the guy who yelled at me for not being at home at 10pm the night before the yard sale when he came banging on my door. But mostly good folks, many interested in hearing my story as much as shopping.

Some of what I sold I was happy to be rid of. I sold off some furniture that I had no real attachment to, and some old stuff that was cluttering up my place but that I couldn’t bear to just throw out. Selling it off was a bonus – getting money to have people come and clean up.

But some of my stuff was hard to get rid of. I’d spent a lifetime acquiring and admiring it, and now I was giving it up. Like backpacks I took through Europe, books I enjoyed reading and kind of wanted to keep, my bed and sheets that I spent so many mornings of refuge in, while we both cursed the alarm clock for ringing so loudly so early.  It wasn’t just that I ws letting go of these things, it was that the value I placed on them personally was so much more than the yard sale value. And that was hard. If I’d parted with a precious object for $1M I’d feel adequately compensated. But for $1 it hurt.

But that was a cathartic process. Getting rid of the old things that kept me tied down. That freed me up to truly feel like I could travel without leaving so much behind. And that was good.